Most ecommerce leaders don’t look at their revenue correctly.

With limited time to interpret their data, decision-makers rely on assumptions or instincts when making big decisions.

While there might be a monthly spreadsheet to reference or an agency update, this leaves a lot to be desired and ultimately can cost brands millions of dollars in missed opportunities.

The fastest-growing DTC brands today have a deep understanding of their data. They constantly run tests to maximize their revenue streams. If you’re an ecommerce leader in 2022, you need to understand which levers will drive the most revenue in the shortest amount of time.

So how can this be done in a practical way with limited resources?

In this Revenue Series by PenPath, we’ll explain how top-performing marketers interpret and use their ecommerce revenue data almost like a growth hack to scale sales. We’ll show you with detailed examples how exactly you can recreate this in your organization. Feel free to skip ahead:

Where is Ecommerce Revenue Measured?

Let’s first understand where you can access revenue metrics. The figure below shows the three primary areas where revenue is tracked. Part 1 of this Revenue Series will focus on the left circle – Ecommerce Platform Revenue.

Platforms like Shopify, Woocommerce, and BigCommerce all handle orders and provide reliable revenue metrics. Pretty straightforward – these and other similar platforms are what we refer to when we say ecommerce platforms.

The tactics explained in this post can also be used with point-of-sale systems or third-party retailer platforms like Amazon since they contain similar data.

Here are a couple of screenshots of the Shopify and BigCommerce platforms and how they display revenue: 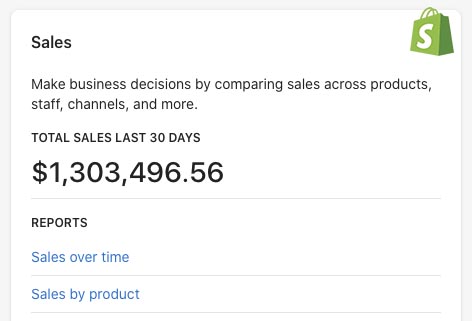 How the Shopify platform displays revenue 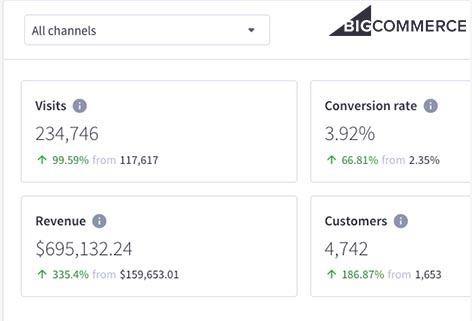 How the BigCommerce platform displays revenue

To interpret your revenue, we encourage you to first be aware of the various ways revenue is calculated. Does your platform show Total Revenue? If so, does this exclude shipping, discounts, and taxes? Make sure you reference your platform’s documentation to confirm.

After clarifying what exactly “revenue” means, ask yourself, what other metrics could we pair with revenue to tell a more complete story?

Being fluent in your ability to pair metrics together means you can connect the dots. This is an absolute game-changer. Pairing metrics helps tell a more complete story so teams can understand what they need to do to improve performance — in this case, increase revenue.

Here’s an example of what we mean when we say pairing metrics together to tell a meaningful story:

Note how we explained revenue and then segmented this data further by pairing it with Repeat Customers and Product Sales.

This analysis tactic allows teams to essentially understand what levers might be available to influence sales. That makes data meaningful.

Now, how do you take something meaningful and make it actionable? In this simple example, you could assume that promoting Blue Jeans Jackets to new customers would generate more repeat purchase sales.

Relevant metrics you could pair with revenue:

Once you pair metrics, try to ask yourself “what does this mean?” (Meaningful) and “what do we need to do if we understand this?” (Actionable).

To further explain how you can do this, we wanted to show a couple of examples of this approach from beginning to end in more detail. Think of these as mini case studies.

Increasing how much new customers spend and how frequently they return

Recently, a PenPath customer — let’s call them BlueShoe — noticed a 33% drop in orders compared to the prior year. This was obviously hurting revenues. To turn things around, BlueShoe analyzed their data to find answers and a way out.

In this example, we’ll show how they used PenPath to complete this but this could have also been done with exported data and Excel, granted it would take a long time and significant data skills.

The two biggest opportunities they discovered were:

The team concluded that these were their biggest opportunities to turn things around.


It turns out there are three products found in 25% of new customer purchases. Furthermore, these products had little volatility (low returns with predictable sales) and high demand (increasing orders every month).

The team then took this (meaningful) information and concluded that a 20% price increase would increase AOV and have little to no impact on total orders or conversion rates.

The BlueShoe team also took into account external factors such as increasing costs and inflation.

Using PenPath, BlueShoe identified which products were most frequently purchased by new customers.

When reviewing their data one month later, they compared their numbers with their prior-year performance. Here’s what they found:

After seeing those numbers, the BlueShoe team concluded that their assumptions were correct and this test had clearly increased revenue. Increasing the price on high demand and low volatility products had virtually no impact on orders and increased sales by $9,200.

2) To increase how often customers returned to purchase, the BlueShoe team focused on products that sold well together.

They discovered that a popular item for customers who returned to purchase was the Emerald Handbag.

Two insights surfaced after looking into this data further:

With this information, they were able to identify a lever that should lead to new streams of revenue.

The BlueShoe team identified customers who had purchased the Emerald Handbag without the Leather Wallet. This was a list size of about 2,300 customers — a sizable enough segment to run promotions against.

Their communications team was then able to focus their efforts on emails and retargeting this specific customer segment.

The above example shows how PenPath can highlight products that are commonly purchased together as well as the frequency and value.

When analyzing the results of this campaign, they noticed there was a 33% lift in Emerald Handbag sales compared to the same month last year. In one month, they were expecting to generate $10,000 in Emerald Bag sales but they actually generated $16,000 in sales. This was a $6,000 (60%) increase in revenue in the first month alone.

Making these two changes resulted in a total sales lift of $15,000. If those numbers are sustained, they would increase sales by about $150,000 in 12 months.

The takeaways going forward are to understand how to create data-informed initiatives and quickly test progress and results. Even if these tests did not work, your ability to track results and pivot could avoid wasting large amounts of money.

This interpretation of data can help decision-makers know what to do to increase sales.

Now that you understand how to interpret and use your ecommerce platform data to increase sales, let’s review where your paying customers are coming from and how they behave. For this, we will need Paid Media and Analytics platforms in this series.

Let us know if there are any metric/dimension combinations you’ve found to be effective!

This website uses cookies to improve your experience while you navigate through the website. Out of these cookies, the cookies that are categorized as necessary are stored on your browser as they are essential for the working of basic functionalities of the website. We also use third-party cookies that help us analyze and understand how you use this website. These cookies will be stored in your browser only with your consent. You also have the option to opt-out of these cookies. But opting out of some of these cookies may have an effect on your browsing experience.
Necessary Always Enabled
Necessary cookies are absolutely essential for the website to function properly. This category only includes cookies that ensures basic functionalities and security features of the website. These cookies do not store any personal information.
Non-necessary
Any cookies that may not be particularly necessary for the website to function and is used specifically to collect user personal data via analytics, ads, other embedded contents are termed as non-necessary cookies. It is mandatory to procure user consent prior to running these cookies on your website.
SAVE & ACCEPT